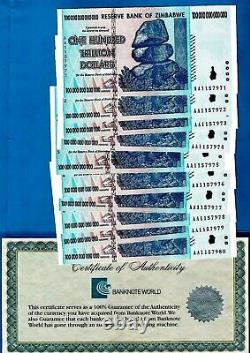 ZIMBABWE - P91 100 Trillion Dollars Consecutive etc 2008 UNC Choose your Note. The 2007 banknote series was prepared by the Reserve Bank in October 2006 for the abandoned second phase of Operation Sunrise.

The Chiremba Balancing Rocks was to be reinstated as the main feature on the obverse whilst use of the Zimbabwe Bird watermark continued. There were additional security features as opposed to previous issues, which included security threads.

The 2008 banknote series circulated from 29 September 2008 to 12 April 2009. The large number of denominations issued in late-2008 as well as the suspension of paper supply by Giesecke & Devrient affected the Reserve Bank's ability to maintain the quality of the banknotes. Later denominations copied design features from the original 2007 banknote series and lacked many modern security features that banknotes of major currencies (such as the Canadian Dollar) relied on. A silhouette of the Zimbabwe Bird in Optically Variable Ink was used in such notes to compensate for this, but the iridescent strip was dropped for higher denominations. Highly Collectable and Rare and high catalogue value. The item "ZIMBABWE P91 100 Trillion Dollars Consecutive etc 2008 UNC Choose your Note" is in sale since Saturday, October 2, 2021.

This item is in the category "Coins\Banknotes\World\Africa". The seller is "stanleyha0" and is located in London. This item can be shipped worldwide.