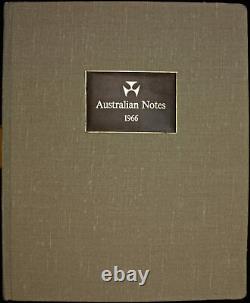 Australia 1966 Type I Special Presentation Specimen Banknote Set In Official Beige Folder. An incredibly rare chunk of Australian numismatic history. To mark the introduction of Australia's new decimal currency notes in 1966, the Reserve Bank of Australia (RBA) prepared a special album that included two examples of each of the new denominations, as well as information on their design and production. It is known that 17 albums were personally named for the recipient and signed by the Governor of the Reserve Bank, and were presented to. The Queen, The Duke of Edinburgh, The Governor-General (Lord Casey), The Governor General's Wife, (Mrs Casey), The Prime Minister (Sir Robert Menzies), The Federal Treasurer (William McMahon), The Secretary to the Treasury (Sir Roland Wilson), President of the Senate (Sir Alister McMullin), Speaker in the House of Representatives (Sir John McLeay), Leader of the Opposition (Arthur Calwell), The Governor of the Bank of England (Retired, Lord Cromer), The Governor of the Bank of England (Lord Cobbold), The Governor of the Reserve Bank of New Zealand (Gilbert Wilson), the artist Alister Morrison, the artist Gordon Andrews and the artist Russell Drysdale.

An additional 235 albums were printed in exactly the same style, although they were not signed by the Governor of the Reserve Bank of Australia. Only 191 of these albums were actually distributed, to the following people and organizations.

The Governor of the Reserve Bank (Sir Herbert Nugget Coombs), The Deputy Governor of the Reserve Bank, Reserve Bank Board Members, Members of the Design Panel, Major Trading, State, Savings & Foreign Banks, Commonwealth Central Banks, Other Central Banks, Libraries & other institutions in Australia & overseas, High Commissioner in London, People and Organizations on the General Manager's list (mostly printers and overseas banks), Reserve Bank Archivist, Retired Treasury officials as well as Mr E. A total of 208 Type I specimen banknote albums were thus distributed. If we presume that albums distributed to public collections will never be available to the collector market, it seems that at most, only 86 Type I Specimen note sets will ever be available to collectors. Specimen banknotes are of great interest to collectors for the following reasons. They are printed before the commercial print run for the general public; and.

They were generally presented to a very restricted list of prominent persons. The market has now eased of course, and certainly seems to be lifting off the bottom. Some doomsayers will say that the supply of these sets has escalated dramatically since mid-2012, yet the reality doesn't quite match up to that perception.

Given how important these notes are to any collector of Australian paper decimal notes, I hardly see that as being a flood, particularly since that is the same level of availability that we've experienced for the past 2 decades. We haven't seen Type I decimal specimen note sets trade in their current price range since the late 1990s, and.

Sets have been split up since then. This set remains in pristine condition - the covers are devoid of any wear or damage, while each of the notes remain in excellent condition.

This item is in the category "Coins\Notes\Australian". The seller is "sterlingcurrencyau" and is located in Fremantle, WA. This item can be shipped worldwide.