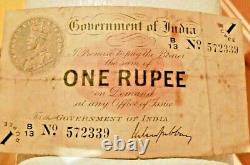 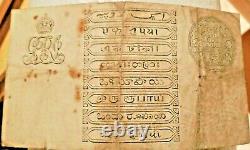 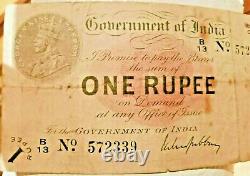 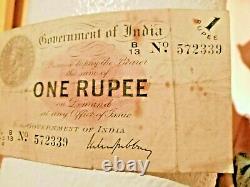 Hello All, You have a FANTASTIC Chance to own this piece of History in this SALE! British India P1a 1 Rupee KGV Sign MMS Gubbay. This Bank Note was Issued on 30th Nov'1917. Discontinued on 1st Jan'1926. Paper - White hand-made moulded paper. Watermark - two varieties - star enclosed in a rectangle and rayed star. B' Prefix with WRONG Gujarati Language Text on reverse side. King George V - 1917 Issue - 1 Rupee Packet & Booklet.

The first issue of 1 Rupee was in the form of a packet of 25 notes, which were unstapled, therefore without any perforation on any side. There were instances of these packets containing irregular quantity of notes - lesser or greater than 25 notes, which were reported to the Controller of Currency. This was the second print.

These notes were pre-signed and were legal tender. This was the first case of notes that sank which were pre-signed before they arrived to India from England. Some of these notes that were washed ashore were found on the Southern coast of England. There was already a quantity of notes with the above prefixes in circulation, which were withdrawn. Further re-prints for circulation continued with prefixes'B','C','D','E','F','G','H' &'J', and thereafter, from'N' to'S', with the exception of'K','L','M' &'R' as they were already used in the first issue and withdrawn.

Condition : Well circulated with folds Nicks. Have it in my ownership since last 12 years! Note is Circulated, well preserved with other Bank Notes under my collection. Very good chance for collectors or to go for PMG. This item is in the category "Coins\Banknotes\World\Asia". The seller is "munichsrini" and is located in this country: DE. This item can be shipped worldwide.